On our recent flights from Dublin to Tokyo via Dubai we flew Emirates economy with our baby, J, who was 10 months old at the time. From our pre-flight dealings to the onboard experience here’s the lowdown on our Emirates flights with a baby or lap infant in tow!

Lap infant or own seat: only front facing car seats are permitted on Emirates flights and infants who have their own seat are not allocated bassinet seats (although they can be purchased at an additional cost).

We opted to take J as a lap infant as we prefer a bassinet row and we needed to bring his rear-facing car seat for car journeys.

Bassinet availability: bassinets are available in Emirates economy cabins and their location varies depending on the aircraft.

Seat selection: after purchasing our flights online we rang the Emirates helpline and booked our bassinet seats with the agent on the phone.

We were able to book the most basic economy fare as travelling with an infant meant seat selection was complimentary and the baggage allowance was the same.

Emirates flying with a baby tip: Although J is reaching the maximum size for some of the airline bassinets we still find the bassinet row invaluable for both the extra space and the lack of seats in front meaning no one can recline which would be difficult to manage when holding a baby.

Baggage: infants are allowed one cabin bag weighing up to 5kg for in-flight necessities as well as one fully collapsible stroller or a carrycot as a carry on item providing there is cabin space available.

We took a baby bag as J’s cabin piece and we took his stroller, a cabin friendly BabyZen Yoyo, as our second piece.

Weight concept: our luggage allowance for our flights to Tokyo was based on the weight concept (we had 30kg each). We were permitted an extra 10kg for an infant.

Emirates flying with a baby tip: we priced additional checked luggage and it was expensive so we stuck to the basic limits which we found generous. 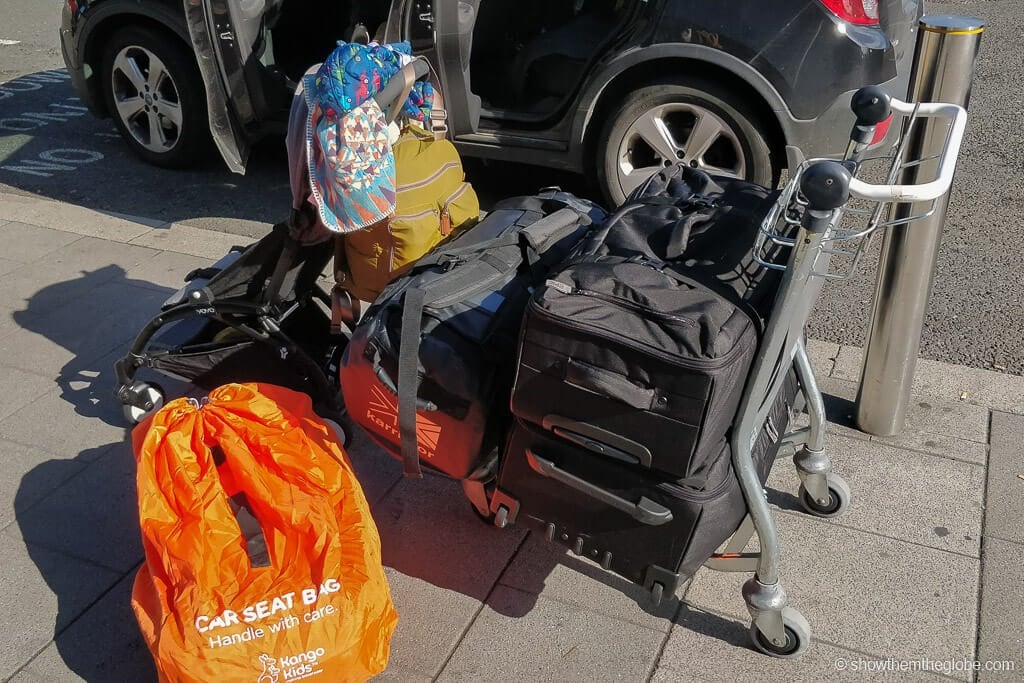 We were thankful for the generous luggage allowance for our three month trip!

Having checked in online, we dropped our bags at the Emirates counter in Dublin and took our car seat to the oversized baggage counter.

Emirates flying with a baby tip: we always use a car seat cover to protect our car seat in the hold.

Passengers with infants are called to board after priority passengers (first/business class and Emirates frequent flyers). It was invaluable having an extra few minutes to store our luggage and settle J before general boarding began. 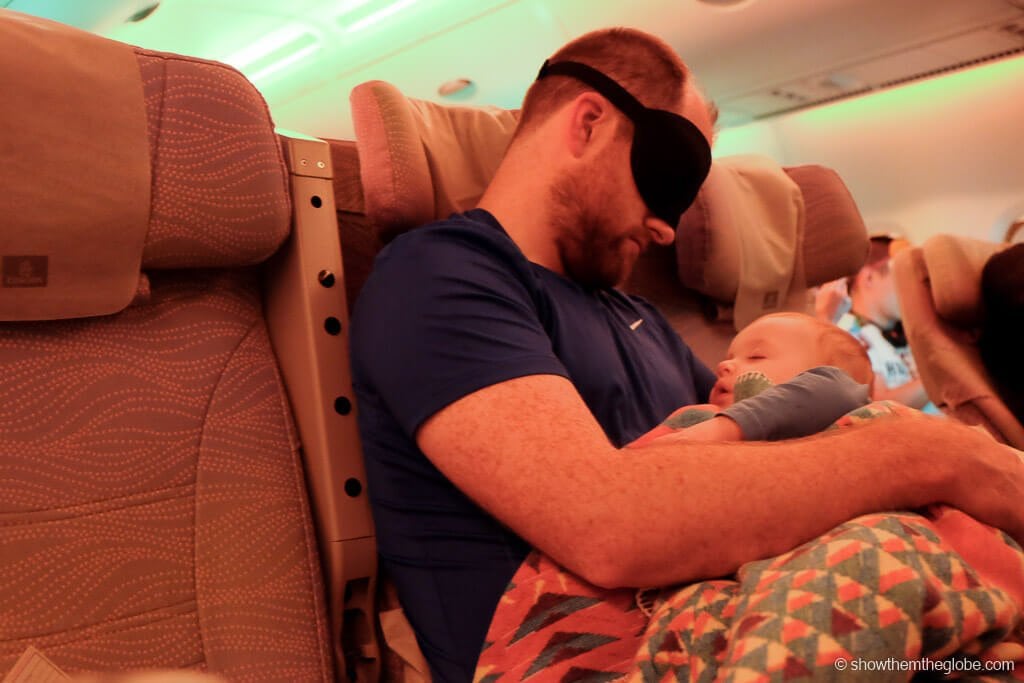 We flew on a two-class Boeing 777 from Dublin to Dubai. The aircraft has three sets of bassinet rows in economy which are located in rows 8, 23 and 37.

We chose row 37 as they are behind the galley rather than the bathrooms which are located in front of row 23. Row 8 is our preferred choice but it wasn’t available when we reserved and didn’t open up before we flew. 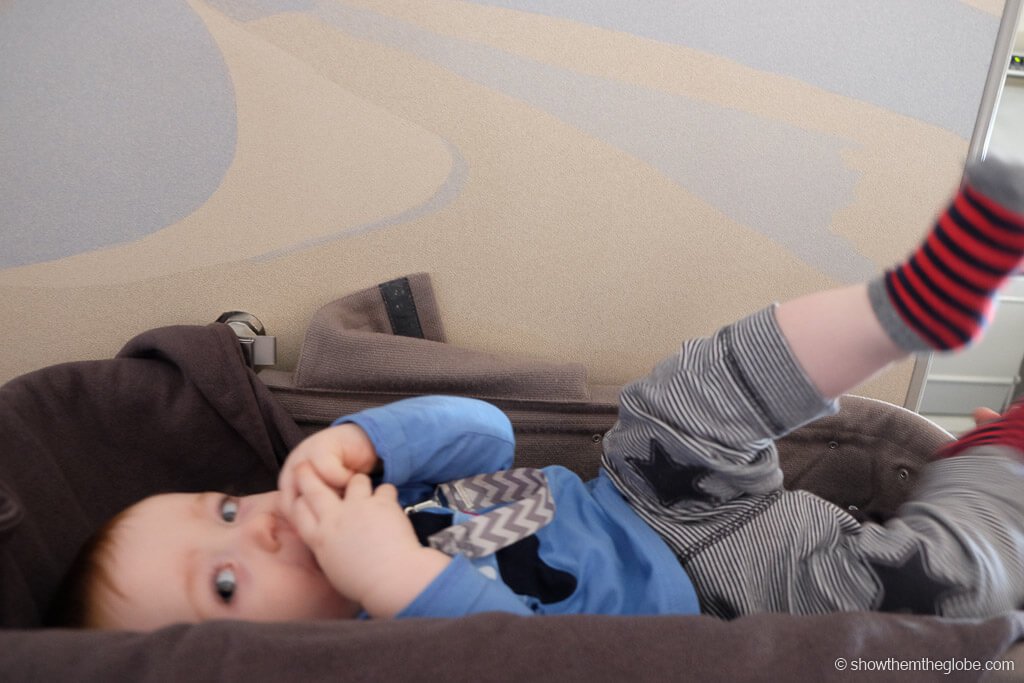 We flew on a two deck, three class Airbus A380 between Dubai and Tokyo. The aircraft has four sets of bassinet rows in economy which are located around rows 46, 54, 67 and 82. We chose the middle of row 46 as these seats are located at the front of the lower deck and are nestled behind the stairs leading to the upper deck with first and business class seating.

We were fortunate to have the four middle seats to ourselves and the crew were kind enough to let us know before take off that we could utilise the four seats. 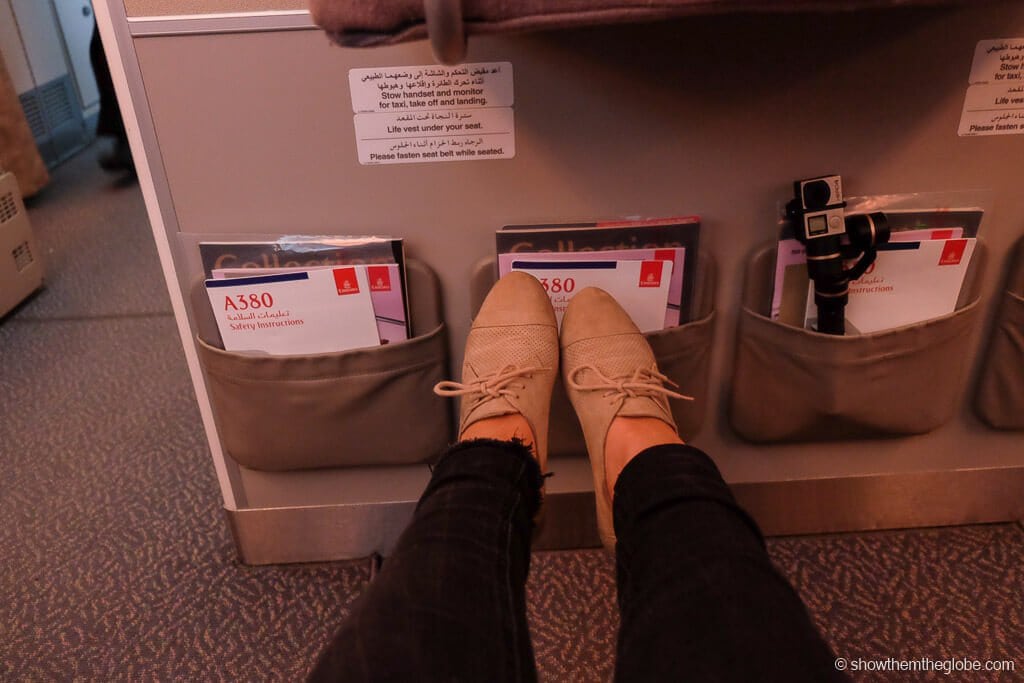 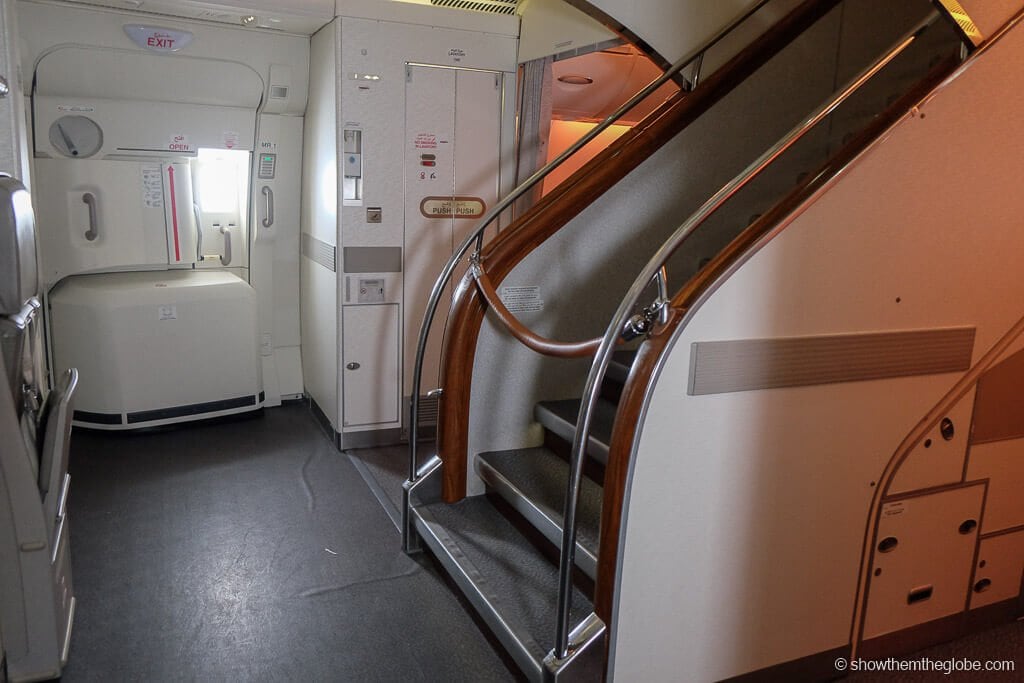 The A380 has some pacing space! 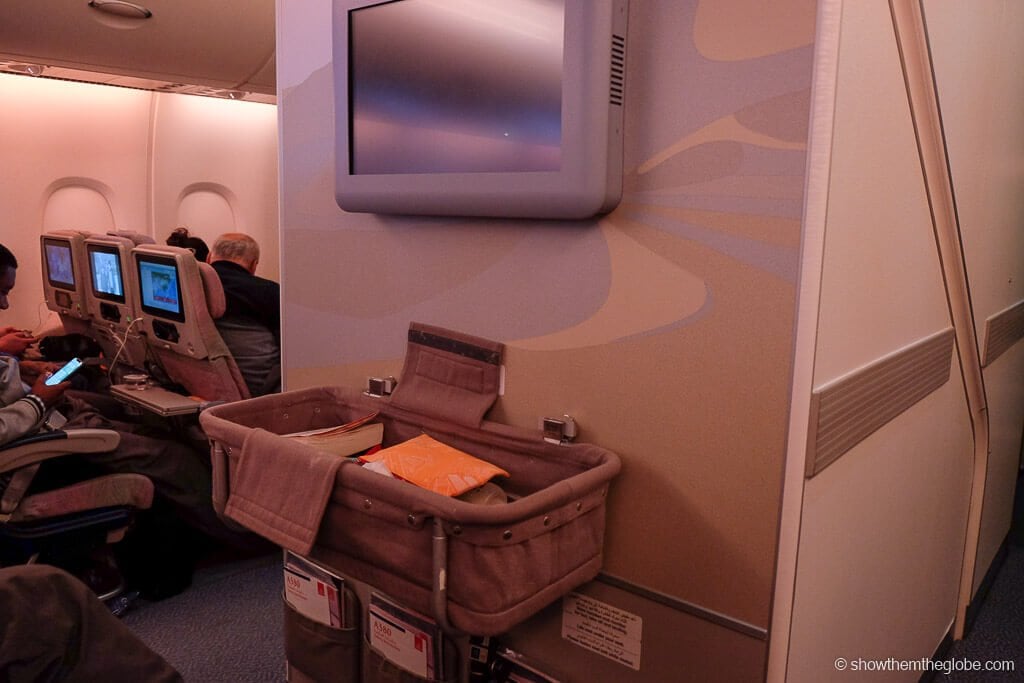 As J was only ten months when we flew we took our own sterile water and he didn’t have anything to drink on board.

There was a changing table in one of the four bathrooms beside our seat on the A380 and in the bathroom beside us on the Boeing 777.

J was given a children gift bag on both flights and it included a little animal themed backpack, stickers and teddies. He was delighted to have some extra toys and still loves his little lion backpack! 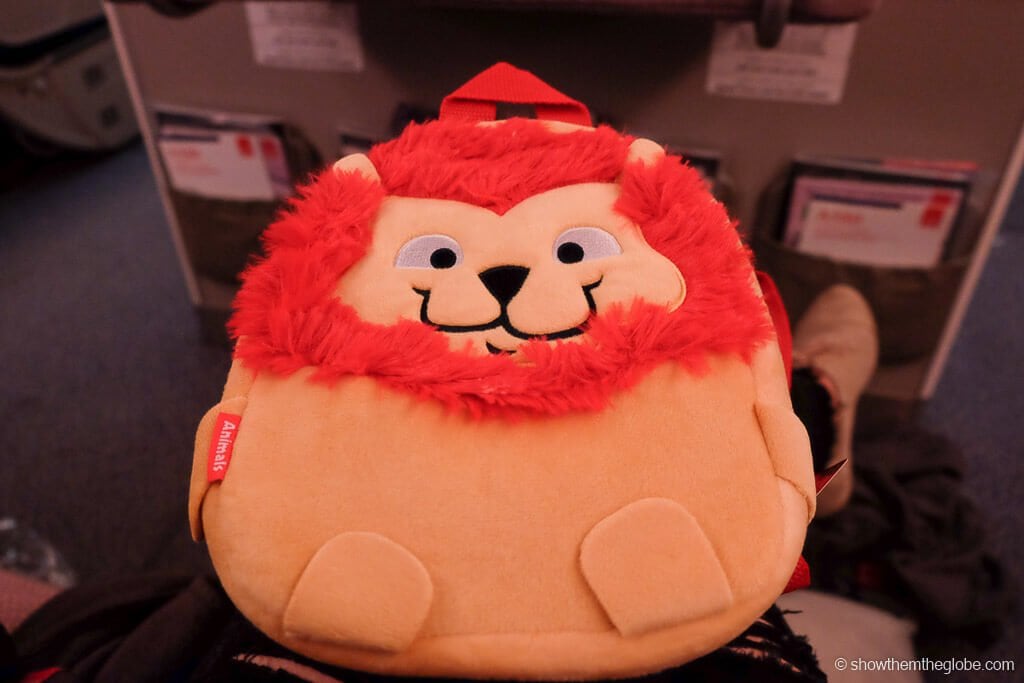 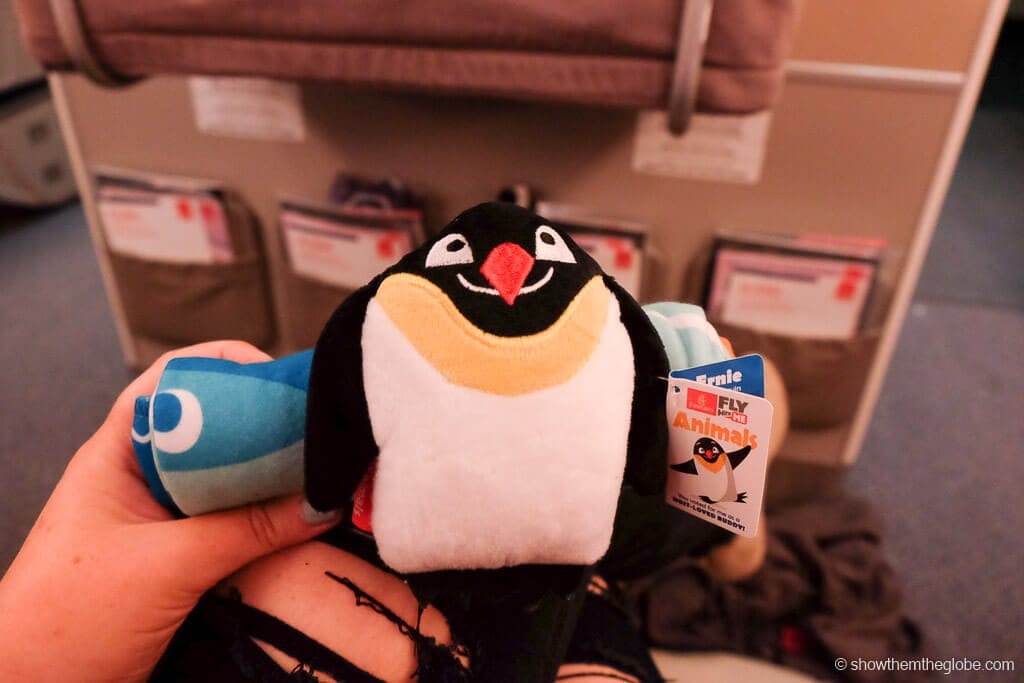 A cuddly toy and blanket 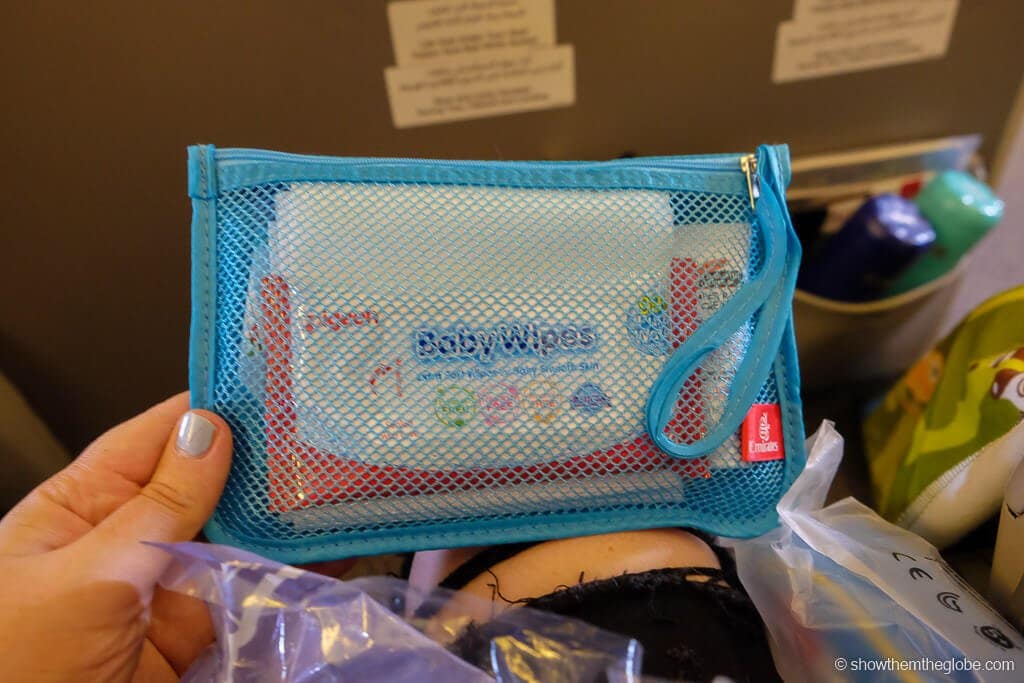 The baby pack is great for bathroom breaks

With pre-boarding, bassinet rows and complimentary seat selection, Emirates offers excellent service for those travelling with babies and lap infants. We much preferred the A380 to our flight on the Boeing 777 due to the slightly wider seats and having room to walk around with J when we needed a break.

The crew were really friendly and did everything they could to help on both flights and always had a huge smile and a friendly interaction with J whenever he was awake.

Thankfully, J was a star on both legs of the trip and he got lots of compliments from the crew with one describing him as the best baby she’d had on board. Who knows how long that will continue but for now he’s a pleasure to travel with!

We’re Elaine, Dave and Baby J – exploring the world as a family one country at a time!

Want to Travel More With your Kids

Learn how to make travelling with your kids easier and fun